If you don’t yet know, one wonders why you are perusing this website? The hoary old answer that Hashers are runners with a drinking problem (or vice versa) probably sums it all up as well as anything.

NB: If you’re more of a watcher than a reader, you can check out two great YH3 videos on YouTube that should answer most of the FAQs listed below:

Don’t be shy about Hashing – if you’ve half a mind to join the Hash, that’s all you’ll need!

What should I wear?

Wear Hash gear – i.e. running clothes that can get dirty! The lack of proper Hashidashery may occasionally get you into trouble. A range of YH3 goodies are usually available for sale before and after each run.

Can I bring a bag and change of clothes?

There is usually some limited space in the YH3 beer truck, or in the cars of the driving hashers (who are enlisted to transport non-driving hashers to Point A) for a small bag if you need to bring one along.

What do you drink?

The brew of choice is generally Myanmar Beer, one of SE Asia’s finest. Locally-brewed Tuborg is also regularly available. For those with a palate that does not appreciate beer, soft drinks (Sprite, 100 Plus, Coke), water and local rum are also available.

You can ask to join the closed group, but due to the dodgy (i.e. incriminating) photos posted on FB, and our total disdain for all posts of a commercial nature, the YH3 FB administrators are wary of accepting every request submitted.

If you have an FB buddy already in the YH3 group, ask them to recommend you.

If you don’t, send the administrators a note (yangonhasher@gmail.com or via FB), advising that you are not a robot, spammer, or marketing agency.

Can I bring a camera?

There are usually plenty of photo opportunities but remember that you will be running through shiggy and so you need to take appropriate precautions with your equipment – always keep your tool protected!

Can I bring the kids?

YH3 is family friendly, open to all ages & we have a number of kids who regularly hash, even a few in prams. 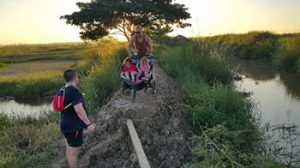 While the running hash might be 8 – 12 kms, the walking hash is about 5 – 7km. It’s a highly recommended alternative to the running hash, with opportunities to walk through parts of Yangon that you would never normally visit. The kids love it. And softdrinks and water are available if they’re not up for the beer drinking.

I’m a walker, can I participate?

As per the query above re the “child friendliness” of hash, there are always plenty of walkers (the injured, the non-running, children, babies in prams, accident-prone, etc) who do about 50% of the running trail. Walkers meet up at the same time and place as all of the other hashers (every Saturday, 2.30pm, refer to the Getting to a run page). All walkers and runners finish at the same end point for the circle and beer. Sometimes beer stops along the route are also shared.

What are the trail markings?

Yangon Hashes rarely feature more than two different marks and often only one! The trail is almost always laid with shredded paper (“shreddie”). Checks are indicated by an open circle of shreddie (often laid around a tree or a pole to prevent it from getting disturbed by inquisitive local urchins). False Trails are indicated (when the Hares can be bothered to mark them) by an ‘X’ and they are more often than not found after a Check. The onward trail after a Check can lie anywhere in a 360 degree circle. The first mark is generally found within 50 metres and by tradition on the Yangon Hash three marks are required to confirm that you are “On.” If you are not On Paper for say 100 metres during a run, you are strongly advised to return to the last mark. If you get lost on trail, nobody will come to find you.

What happens at the end of the run?

The GM runs a traditional Hash circle after the run. Charges by the participants are encouraged.

Do you have an On On On? 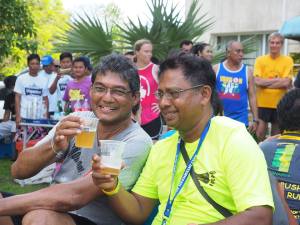 After the run and Circle are finished everyone returns to town to clean up. Many of the Hashers will then meet up at a local restaurant to eat — and drink some more. This is what is termed the “On On On”. The bill is generally split equally.

What are the run fees?

No distinction is made between visitors and local expatriate hashers. Everyone pays the same. Currently the hash fee is K 5,000 (about $US 5) which covers you for almost unlimited drinking after the run. A small subsidy is made for local Myanmar Hashers to encourage them to participate and under 13’s get a discount in recognition of the fact that they may not guzzle quite as much rum and coke as their parents. Toddlers carried in a back-pack normally get away with no fee at all unless they are seen with a pint of beer in their hand after the run.

How long is a run? 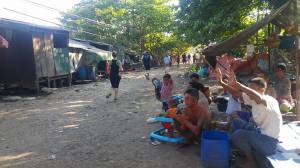 Highly variable and often dependent on the terrain. Front Running Bastards (FRBs) generally arrive home in around an hour to an hour and a quarter and the runs are usually between 8 and 12 km but the FRBs trying to break the Checks can rack up more.

Where and what time will the run finish?

Have you paid any attention to the information provided above, or tried to independently analyse what it might mean to your Saturday night social plans?

Each week we generally have no idea where the trail will start or finish, and it is therefore difficult to estimate the end time. 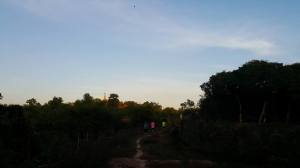 We leave from University Avenue Rd at 2.45pm (sharp!) and the trail start point is generally a 30-45 minute drive away (it has been known to take longer to get to Point A). We group up, run for 1 – 1.5 hours, circle up & then return to our respective homes. Generally this happens before sunset, but it all depends on a number of variables – the run, the traffic, the trail, the markings, etc.

Some folks with Saturday night appointments might meet up on University Avenue Rd at 2.30pm, and upon learning of the start point and talking to the hares, determine if the run will fit in with their subsequent appointments and exciting social life.

It happens but out-of-towners should be aware that the vast majority of YH3 runs are of the “A to B” variety where the “B” point is not revealed prior to the Run. Jungle trails can mean that you quickly lose sight of the pack. If you have no idea where you are going to end up, a GPS watch is not of much use. Better to stay on paper!

Yangon is situated in the tropics and, believe it or not, has a tropical climate. Keeping
hydrated is a key to avoiding heat stroke and water is always provided before, during and after the run. The “cool season” generally lasts from November to February when day time temperatures hover just below the mid thirties (low to mid nineties if you think in Fahrenheit) and the humidity is low. From the end of February until early May the temperatures warm up and it is called the “hot season” for a reason! Temperatures can easily exceed 40 deg C (104 deg F) and the humidity soars. The YH3 normally has a mandatory beer stop during a run in the hot season. The “rainy season” (monsoon) usually lasts from about mid May until mid to late October. If you are running during this time, you should be prepared to get thoroughly wet! Day time temperatures hover in the low 30’s but night time temperatures are not much cooler (around 24  deg C) while humidity levels are in the 90+% range. 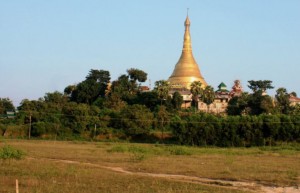 When do you run?

How do I get to/from a run?

See the “Getting to a Run” page.

Are you new to Yangon or Myanmar?

Occasionally travelling hashers will ask YH3 about travel tips, accommodation options, etc around the Golden Land. YH3 is not a travel agency or tourist information centre, but can suggest the following for folks coming to Yangon:

Visitors to Myanmar may also want to check out this cultural guide to the “Dos and Don’ts for tourists” (October 2012), which promotes responsible tourism in the Golden Land.