The Yangon Hash House Harriers (YH3) meet every Saturday afternoon for a fun run and a few beers.

The YH3 first commenced running around Yangon (or Rangoon as it then was) in 1980 and has enjoyed something of a chequered history. However, since 1992 the club has run on a weekly basis, with Run #1500 to be celebrated in November 2016.

The runs are non-competitive and are planned in such a way that everyone finishes within a few minutes of each other, irrespective of sporting ability. Indeed a goodly percentage of those taking part make no attempt at running whatsoever but enjoy a good walk. The runs can take place anywhere in and around the environs of Yangon and, more often than not, take place “off road” so you should be prepared to encounter mud, water, livestock and perhaps the odd leech! You don’t need any special equipment – a pair of good running shoes, shorts and T-shirt will suffice. It is a truism that you will see and go to places on the Hash that you would not normally even know existed and it can be a good way to see an alternative view of life in the ex-capital. 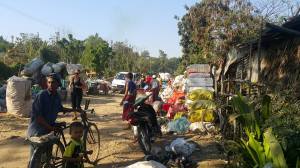 The number of runners taking part each week are variable but we average around 50. The runners, who currently age between a few months and the mid-eighties, have diverse backgrounds and ethnicity but the common thread is the social aspect of the run. Immediately after each Hash, refreshment is served in the shape of a few beers and any notable misdemeanours are publicly celebrated. Later in the evening, the members will meet up for a dinner and socialising can often go on to the wee hours if you are that way inclined.